Before you go, please sign up to be the first to hear about our promotions, vintage decor and sparking new jewellery!

Also referred to as Aestheticism,

is a 19th century art movement with an emphasis on aesthetic values over deep meaning.  The prime function of an object was to be beautiful ---- "art for art's sake".

The origins of Aestheticism are in the Orientalism movement of the 1850s and 60s.  After The Great Exhibition in London in 1851 several Oriental objects were purchased by The Government Schools of Design as study collections, enabling students to experience the "East" for the first time.  The Museum of Ornamental Art, which later become The Victoria and Albert Museum, purchased Japanese lacqeur and porcelain for the permanent collections in 1852 and 1854.  The Meiji Restoration in Japan in 1858 allowed freedom of ideas to flow in and out of Japan.  Previously Japan had been closed to all but a limited  number of Dutch merchants that were limited to trading in the port of Nagasaki. The London Exhibition of 1862 was the first time the English general public were exposed to Japanese arts, textiles and household goods in a major way.

The production of British made, Aesthetic style furniture and residential decorative items occurred primarily between 1870 and 1900.  Recurring decorative themes reflect an Eastern influence, the style referred to as "Anglo-Japanese".  By the Paris Exhibition of 1878 this was known as the "Modern English" style; Christopher Dresser being one of the chief proponents of the exoticism of these new visual ideas.  It is in this period that Arthur Lasenby Liberty (1843-1917) opened a small shop on Regent St. in London, selling small ornaments and objet d'art imported from Japan and the Middle East.  Liberty's opening in 1875 heralded the first successful commercial outlet of Aestheticism accessible to the shopping public.  Some of the designers that worked with or for Liberty's include Christopher Dresser (1834-1917), E.W. Godwin (1833-1886), Archibald Knox (1864-1933) and C. F. Voysey (1857-1941).

The flattening of planes and layering of compositional spaces borrow from Ukiyo-e, Japanese wood block prints.  On some pieces the ornamentation was on an ebonized or blackened background.  Naturalistic devices of flowers, birds, gingko leaves and peacock feathers are prominent.  Asymmetrical and collaged placement of the design motifs, such as fans and banners, contribute to the suggested randomness and naturalism of the overall design.  Gilded highlights add to the sensuality of the visual experience.

Some examples from the collections of Cynthia Findlay Antiques demonstrate these design elements. 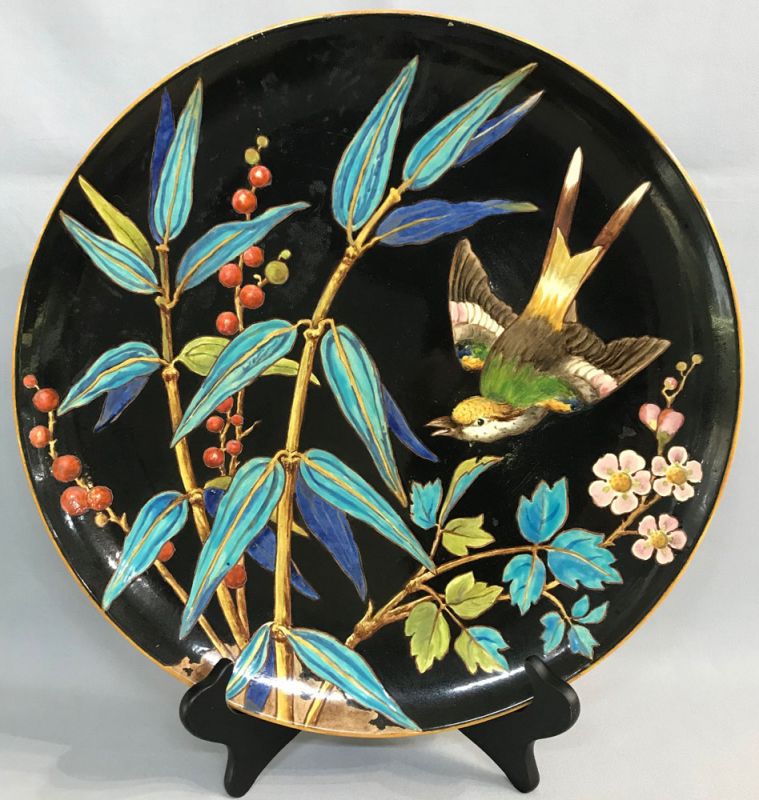 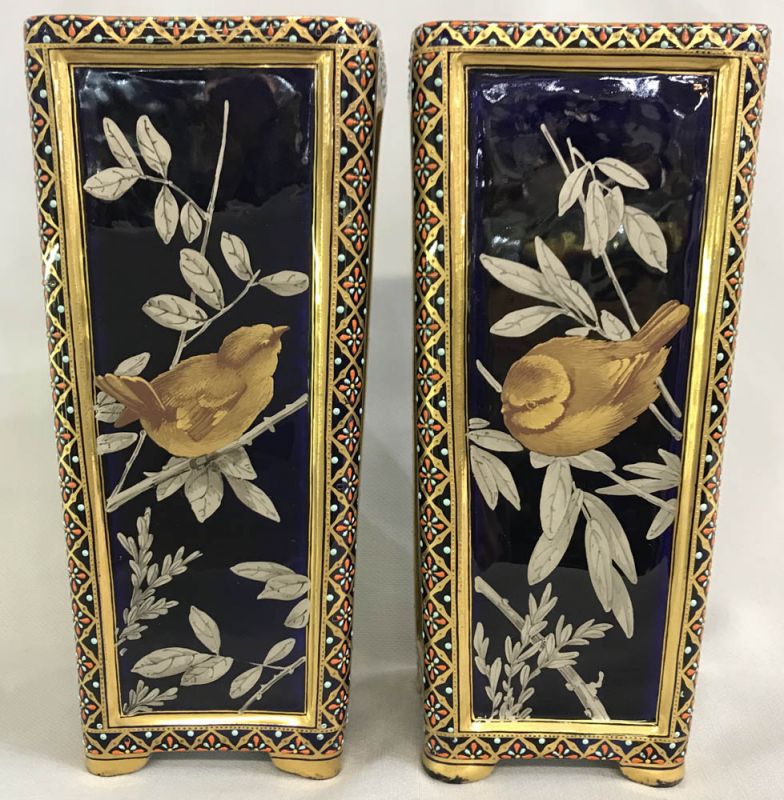 Demonstrate the use of birds, flowers and leaves organized asymmetrically against a black background.

Both the Royal Worcester cabinet vases, circa 1880. 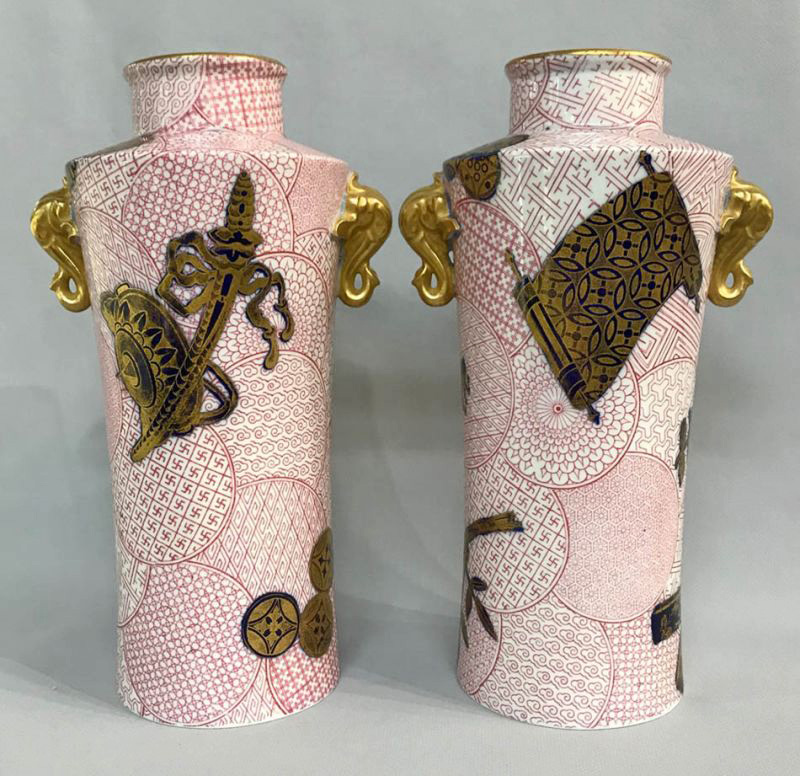 And the Mason's Ironstone vases, circa 1890.

Demonstrate the use of collaged multi-motif placement of fans, circles and panels in the overall design.

Thank you to everyone that voted to help us win diamond awards in the 2019 Toronto Star Readers' Choice Awards for the Best Jewellery Store and the Best Antique Store. We really appreciate it, thanks again! 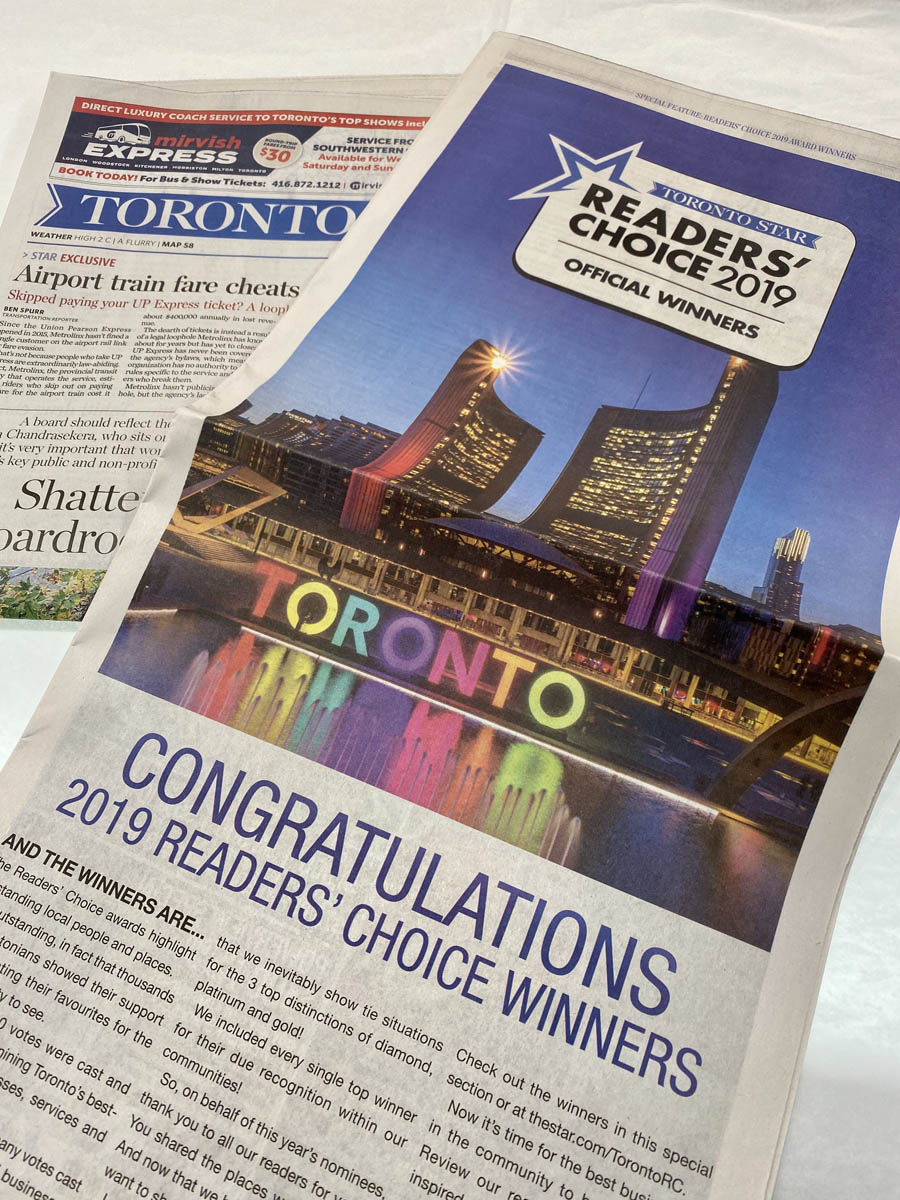 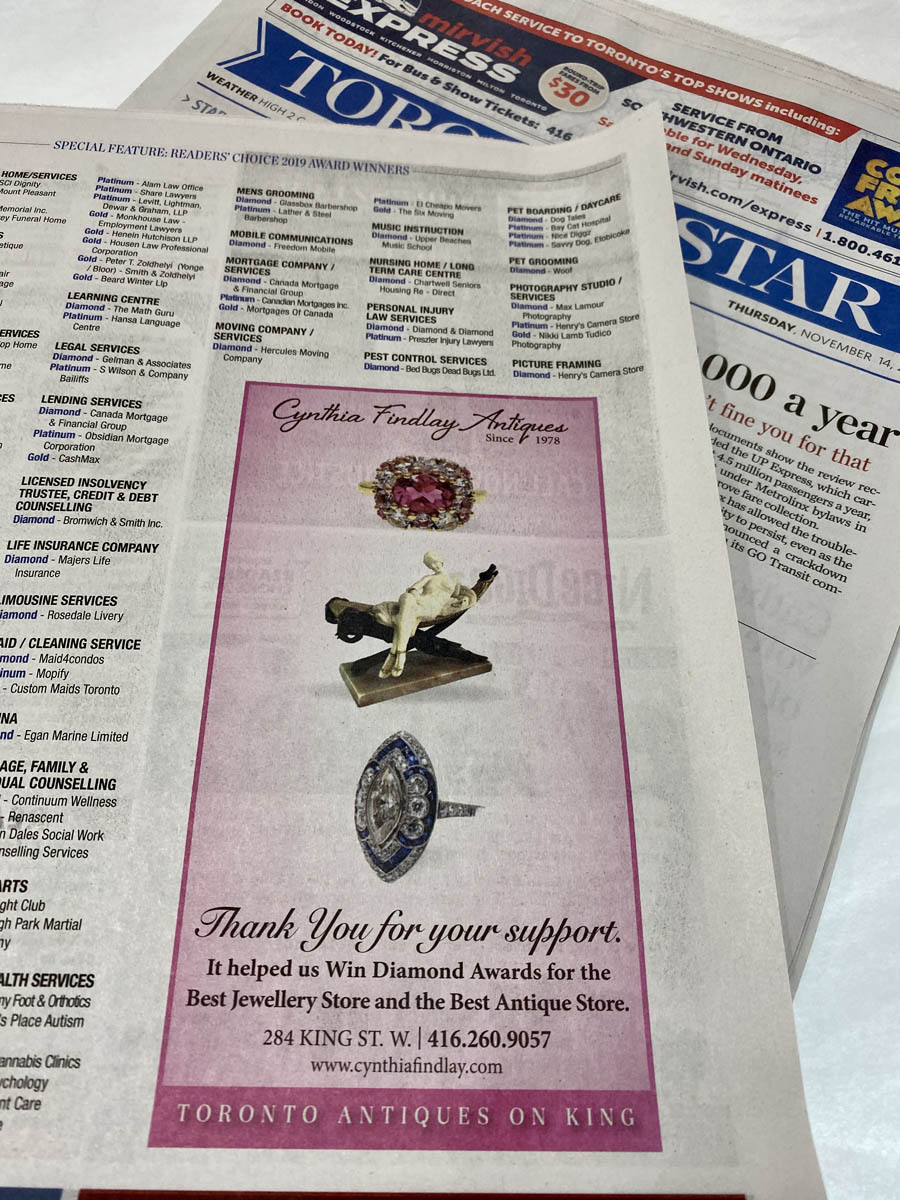 We Have Been Nominated For The Best Antique & Jewellery Store

Please Vote For Us By Clicking Here!